So as you likely already know, I took a wonderful month long trip to Africa. While there I was on a tour group, and had the most amazing time of my life. I came back a changed person, hopefully for the better. However, what I learned about Africa is how much they live off of bread (and bread like products).

From a tour perspective, I probably was eating 4 – 6 slices of heavy bread a day. It’s cheap and easily available, so I am not surprised they fed us lots of bread. Interestingly enough, it didn’t make me feel sick compared to the bread here in North America. I started to think maybe I mentally made myself feel sick at home, and while on vacation I just ‘went with it.’ So I gave myself a small test. When I came back, I ate a piece of bread, and guess what, sick again. When I say sick, I mean bloated, crampy, gassy, and generally uncomfortable. Yet, when I was in Africa, I did feel a bit bloated, but nothing compared to my test.

My conclusion: buy bread in Africa. Okay, just kidding, but there is something to be said around how many ingredients and processes are used to make bread in North America so it a) looks nice, b) smells nice and c) lasts long enough for someone to pick it up in the store and then eat it over some time. Bread in Africa, you buy it today; you better eat it by tomorrow.

Then while I was visiting villages and local homes, I realized that they always had bread or “dough” type food made from either cassava (pictured above) or maize, both of which they grow in their farms in the village. Its very cheap to cultivate, and relatively easy process to make into a flour consistency to be made into “bread.” Here are a couple of my observations around this.

Firstly, these bread food products are clearly a staple and usually more than 50% of a plate’s portion. Furthermore, also usually eaten daily at nearly every meal! Secondly, none, and I mean NONE of the people I came across were obese, none. There are many reasons for that, which I will not get into, but even if I personally ate more than 50% of my diet on bread like products and worked out daily, I would still be significantly overweight.

Truthfully, I don’t have any conclusions about these observations. But it really did put a couple of holes in some of my personal assumptions about bread, and also the quality and purity of ingredients. And, realistically, it makes me want to become a farmer or something.

Picture: local woman peeling cassava which will be then fermented and turned into flour.

Picture: The cassava in the fermenting process, it smells like cheese, and as you can see its just out in the open. 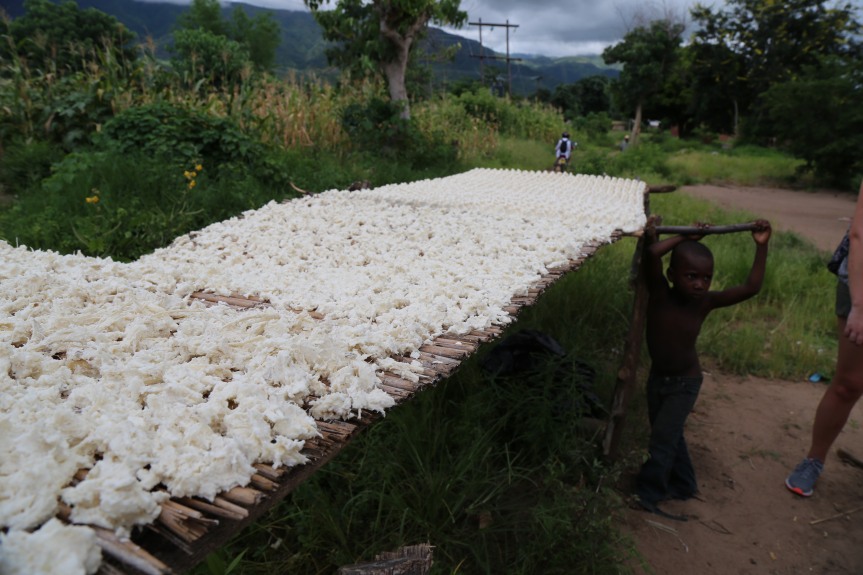